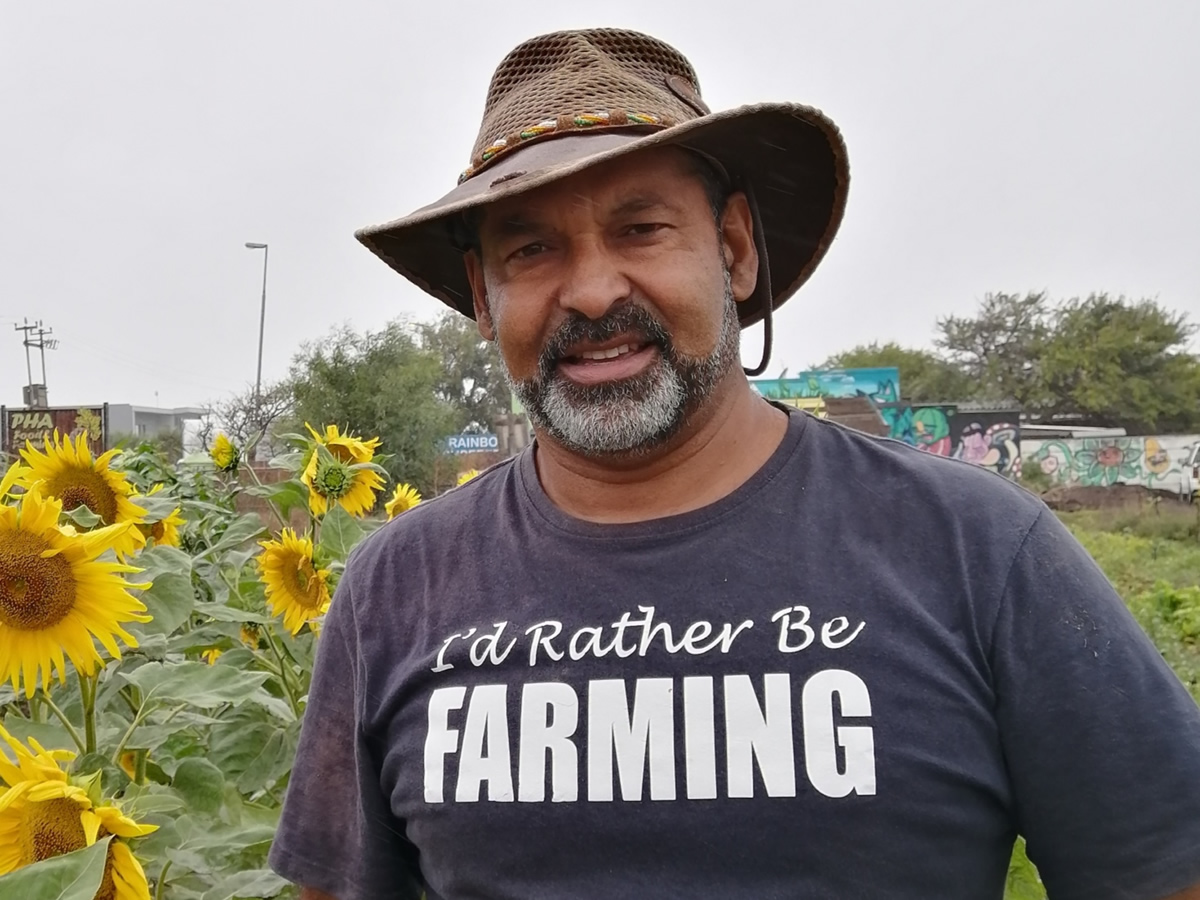 “Nazeer Sonday is a small-scale farmer and chairperson of the Philippi Horticultural Area Food and Farming Campaign. He was born on a smallholding in Philippi outside Cape Town. “My family was removed from the area in 1973 under the Groups Areas Act. I returned in 1991 and bought one hectare of land, where I pursue a livelihood as a small-scale farmer,” he says.
Sonday has been involved in community development since 2008, when he started the area’s first non-racial civic association and an emerging farmers’ group. These organisations merged in 2013 and became the PHA Food and Farming Campaign.
Sonday defines sustainability in farming as making sustainable use of natural resources such as land, soil, water and biodiversity. But Sonday says that these resources are degraded and to just maintain their status is not enough: instead, he believes in regeneration.
“Our objectives are to protect the PHA agricultural land from urban sprawl for the benefit of everyone in the city. We also aim to protect the Cape Flats aquifer and to develop a small-scale farming model.””

“Our objectives are to protect the PHA agricultural land from urban sprawl for the benefit of everyone in the city. We also aim to protect the Cape Flats aquifer and to develop a small-scale farming model.” 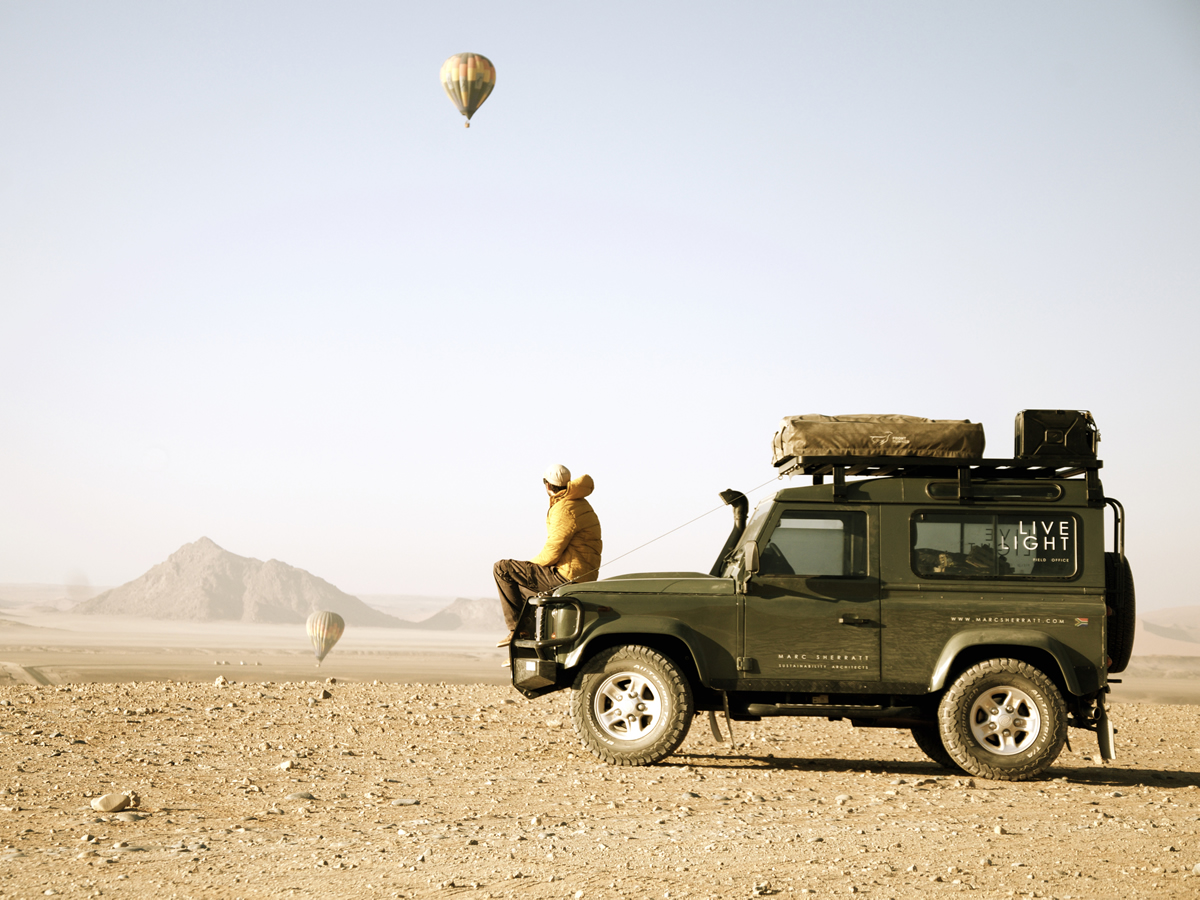 “For his master’s, Marc Sherratt designed a building that reintroduced the locally extinct and endangered Cape Vulture back into the City of Johannesburg. His project challenged current approaches to conservation areas.

Entering the working world, he noticed a gap in the market for an architect specialising in sustainability. With support from his wife, a senior green building consultant, he founded Marc Sherratt, Sustainability Architects (MSSA), with a mission to “”reverse local extinction through sustainable architecture””.

Sherratt sees green buildings as a catalyst to restart the building industry while employing people at scale. “For me the responsibility to live within the planet’s ecological capacity is part of what it means to be human,” Sherratt says.

The couple travel Southern Africa researching ecological and cultural systems and design wildlife migration routes for species such as elephants so they can once again move unhindered across our country.”

“For me the responsibility to live within the planet’s ecological capacity is part of what it means to be human.” 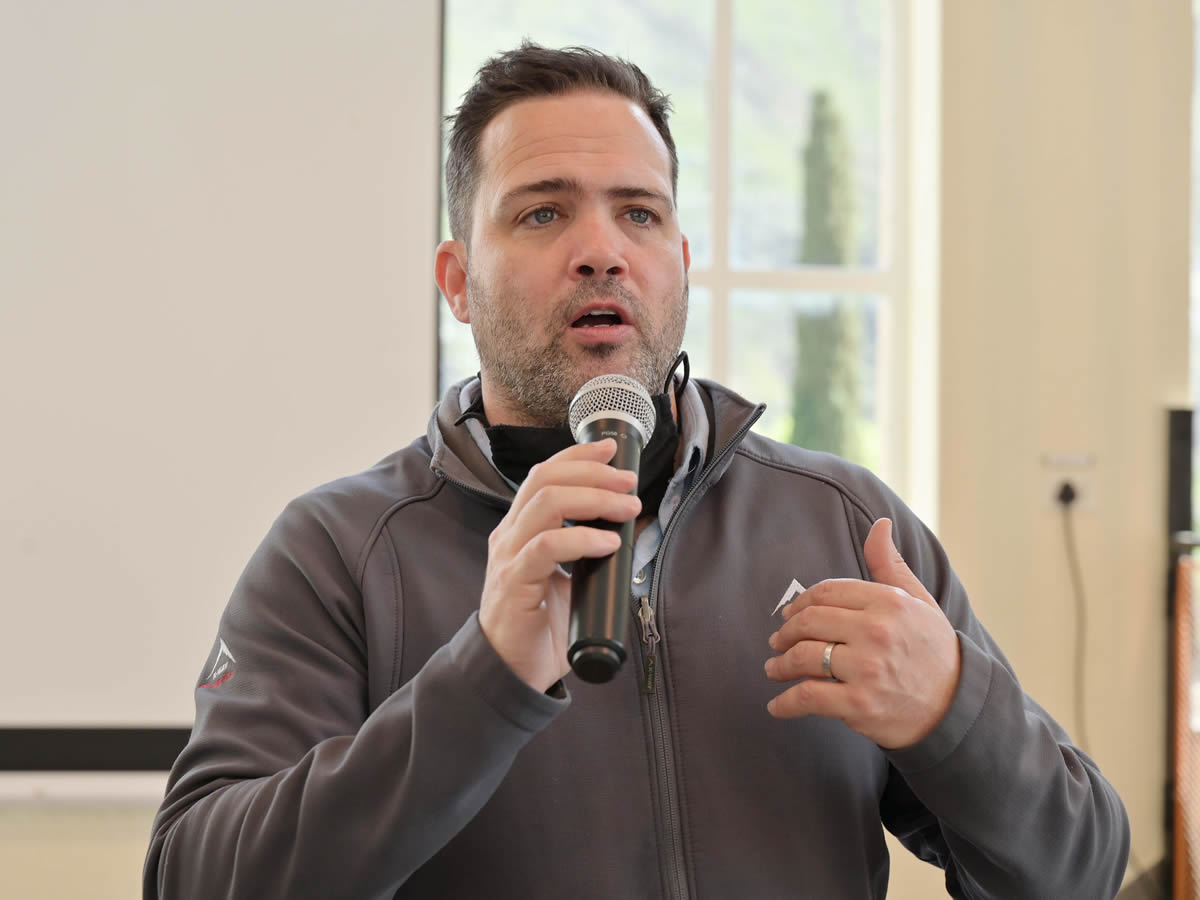 “Gareth Morgan is the director of Resilience at the City of Cape Town and led the team that developed the first Cape Town Resilience Strategy – an innovative roadmap for a city responding to globalisation, urbanisation, rapid technological advancement and climate change.

The strategy drew learnings from the region’s recent devastating drought, and applied them to a wide range of possible shocks (flooding, cyber attacks and power outages) and stresses (unemployment, poverty, food insecurity and climate change). South Africa is dealing with the climate crisis, urbanisation, technological change and globalisation, resulting in occasional shock events.

Developing ways to build resilience is important to minimise the impact of shock events, and will help with a quicker recovery. The City of Cape Town has been implementing this strategy for more than a year, and 20 of the actions in the strategy have been deployed during the Covid-19 pandemic response. In total, about 50 of the 75 actions have already been partially or fully implemented.

Morgan and his team are currently engaged in the development and deployment of large infrastructure portfolios, and are aware that an important challenge for the future is to build resilience lenses into all processes and decision-making.”

“Sustainability is important, but for systems to ultimately be sustainable, they need to be resilient. A city can only strive to overcome its vulnerabilities to be increasingly more resilient, making adjustments as and when new realities emerge.” 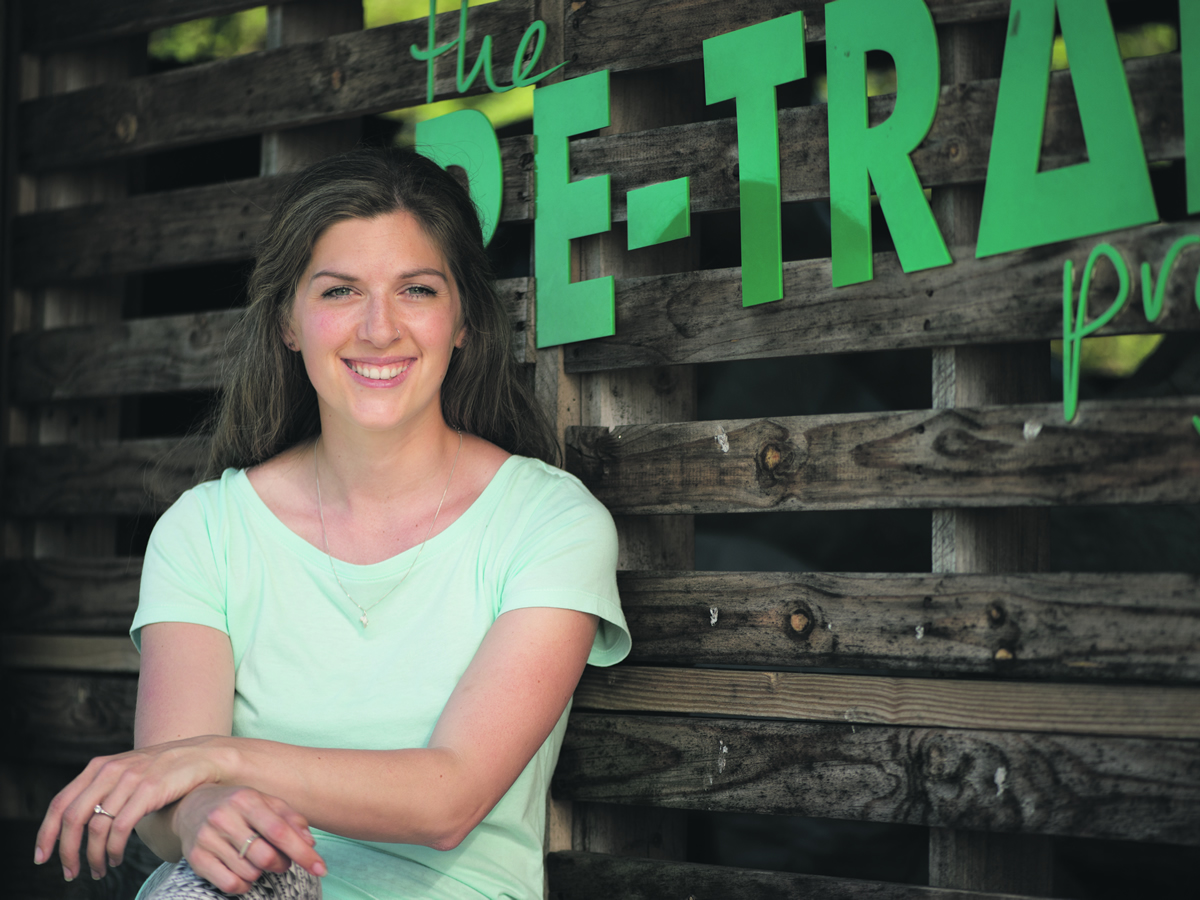 “The ReTrade Project is a community-based recycling and social empowerment initiative. It seeks to sustainably provide members of the community with an opportunity to be environmentally responsible while gaining access to food and other basic essentials. Passionate about restoring hope and dignity to poor and marginalised people in South Africa, the team builds relationships and provides resources that individuals would not previously have had access to. Families in need can collect recyclable waste such as tins, plastic bottles, cardboard, paper and glass, and exchange this waste for basic goods at the in-house Trade Store, improving their lived environment while earning an income.

Maria Grewar is the founder and director of the ReTrade Project in Port Elizabeth. She moved to South Africa from America when she was 18 and developed a love for this delicate and diverse country – as well as her newfound proximity to the beach and bush. Sustainability became important to her when she began to realise just how fragile South Africa’s ecosystems really are. She also noticed large portions of South Africa’s vulnerable communities living in some of the most toxic and polluted places in the country.

Considering that the country’s economically disadvantaged citizens are also disproportionately affected by poor environmental conditions, it makes sense for The ReTrade Project to provide an intervention that starts in and is driven by the community it serves. While the value of the community clean-up aspect of the project is easily apparent, its layers of value also involve improving communities by providing environmental education that will have far-reaching, long-term effects, and breaking the cycle of poverty that has its own role to play in the lack of community value. The project has initiated a volunteer programme, which allows members of the community to offer a few hours of their time to assist in the Trade Store or with education programmes.

Grewar believes that South Africa’s human and environmental diversity is rare and unique, and she longs for that value to be preserved for future generations. She elaborates: “Since moving to this beautiful country 12 years ago, a need to preserve the landscape and creatures who cohabit it began to take root in my life. It fills me with an intense longing to see my children and grandchildren be able to enjoy this pristine part of the world in which we live, and to live equally well among others with dignity and compassion.”

The ReTrade Project aims to assist individuals who require immediate aid by providing for their basic human needs, as well as educating them and the wider community on ecologically sustainable practices, and Grewar is excited about the ReTrade Project’s future plans — both social and environmental. In the next five years, the aim is to see their education programmes and mobile buy-back centres rolled out across South Africa. She also wants to collaborate with other sustainability organisations, projects and programmes, and would welcome potential partnerships within her field. Grewar strongly believes that educating people about waste and recycling, while giving them the opportunity to provide for themselves and their families, is a small step towards fulfilling a vision to see the upliftment of people and the world in which we live.”

“Since moving to this beautiful country 12 years ago, a need to preserve the landscape and creatures who cohabit it began to take root in my life. It fills me with an intense longing to see my children and grandchildren be able to enjoy this pristine part of the world in which we live, and to live equally well among others with dignity and compassion.” 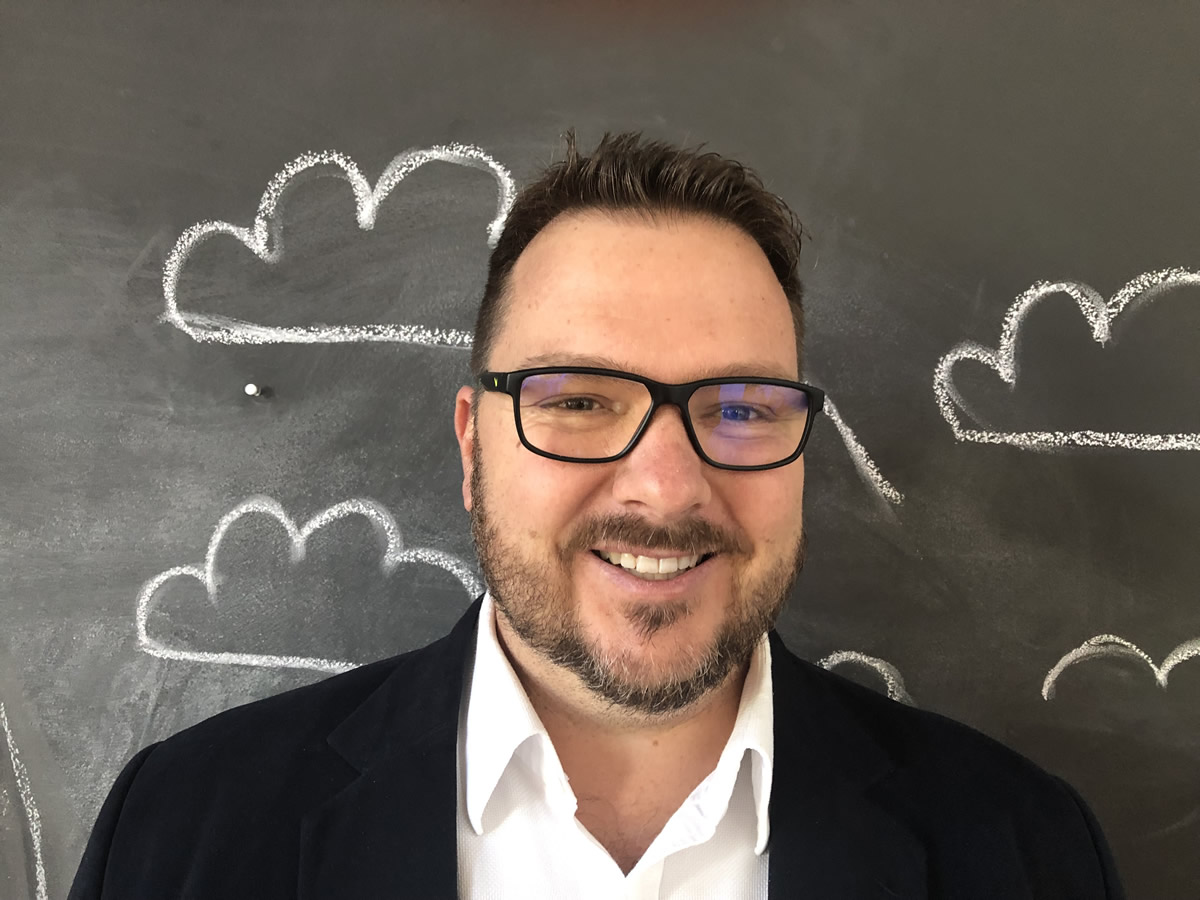 “Fabio Venturi, CEO and founder of the Terramanzi Group, has 18 years of experience across both the government and private sectors of the green economy.

The Terramanzi Group operates across Africa and has focused on regenerative design and UN SDG 2030 integration, from facilities to smart cities.

“Closer to home is the Green School South Africa project that we are very passionate about. Here, our job is to ensure that the project achieves a Living Building Certification and becomes the greenest school in the world,” he says.

Venturi is a founding member of the Environmental Assessment Practitioner’s Association of South Africa, and is a certified carbon footprint analyst and energy efficiency auditor. His entrepreneurial drive to innovate and influence has resulted in multiple awards. He says sustainability has always been a central theme to their work, and is regarded as the only logical way to conduct business and secure the wellbeing of people and natural resources.”

“We are deeply passionate about our youth and this project offers the opportunity to create not only a future-proofed education programme, but also a facility that ensures the wellbeing of occupants and a design contribution to the planet.”